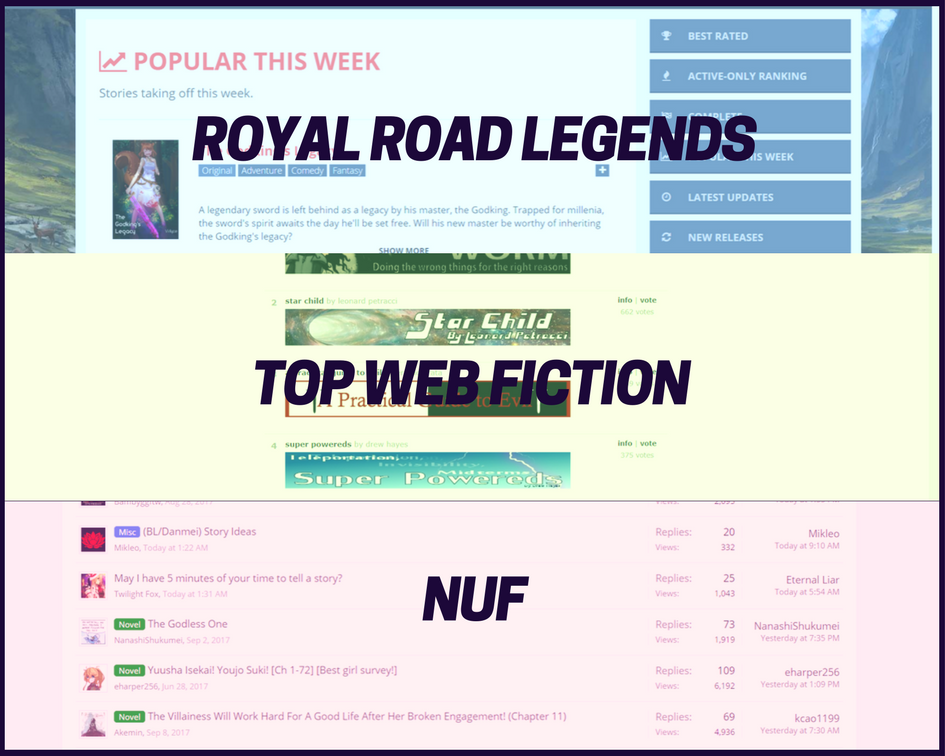 Note: The information here was compiled after research on the most popular categories of royalroadl, topwebfiction and the novelupdates forum. Understand that it is subject to change as the trends themselves do and it is only true for original English web novels/serials. The novels mentioned might not be the best or the most popular of their kind but they are the ones I have actually read. There might be better ones but I will not add a story I haven’t.

Every day, at least twelve new stories, appear on royalroadl. They add to the thousands on the site and though many are eventually taken down, it does give you some idea of just how many web novels and serials are out there. However, the numbers don’t tell you what people like to read or what they are reading right now. Trust me, the one thing many new writers despair about whether people will read their story. So here are the 5 most popular tags for original English web novels right now.

Some things to note first:

This post talks about the novel tags, not genres or categories though they are somewhat similar. I might write on that another time but for now, I can tell you that fantasy is the most popular category among web novels, both read and written. Of these, medieval fantasy is the more popular variation.

For example, the ratio of urban fantasy novels to medieval is nearly 1:2.

Secondly, sci-fi isn’t doing so hot at the moment.

The ratio of science fiction to fantasy in the most popular section of royalroadl is about 1:7.

What’s really telling is that there are only four sci-fi novels in the top thirty best-rated novels on royalroadl and of those, two are only tentatively sci-fi. Why? They are about fantasy VRMMORPGs. Besides the VR and stats screens, they might as well be fantasy.

The situation is better on top web fiction but only marginally. Most sci-fi in their popular listings are holdovers from the days when everyone was screaming “Worm is awesome!” and writing superhero novels.

They are less proof of the popularity and more the staying power and dedication of their writers. As for the novel updates forum (NUF), don’t even go there. Sci-fi is like as qilin horns and …it’s really rare for you to find a sci-fi novel there.

What does that tell us?

Well, fantasy rules! However, there is demand for sci-fi though they form a smaller percentage I’ve found that they are also more involved and the community, the superhero genre especially are quite tightly knit at least more so than others.

What does this mean for you…?

Depends on what you take from it. Remember that these are only the very broadest categories of novels. if you truly wish for a guide; dive into the details.

That brings us back to the 5 most popular tags for original web novels right now.

1. Transported to another world

You come across this so many times you’ve stopped questioning the mechanics. Basically, the protagonist gets summoned/dragged/reincarnated into a different world from the one he was born in for some reason or the other. In some cases, he is summoned to save it, stumbles across a portal, dies and meets a goddess/ random omnipotent being (ROB) or gets hit by a truck. Not a sedan, not a bike, not a sports car, but a truck and often whilst in the midst of saving someone. There are more of these novels out there than any other and they tend to be the ones to rise to the top of the trending lists on royalroadl and NUF and more often than not contain game/lit-rpg elements.

The most popular variations include:

Lit-rpg is possibly one of the fastest growing categories of novels. I remember waiting for releases of Moonlight Sculptor, Ark and Sword Art Online and reading the stories they had inspired in the meantime. Back then, everything was VRMMO then (far less so now), today, whatever genre or tag you can think of, there’s a lit-rpg equivalent. Most split it into hard and soft types with the hard kind focusing more on status screens and stat points than its soft counterpart.

Reincarnation is one of the few tags that is solely MC applicable. The ones above or below, the tag isn’t just a plot element. It affects every character in the story. Not so with reincarnation. The protagonist is the only character who reincarnates, at least, in the stories I’ve seen. If you know of one that’s different, let me know. I’ll read it. It is often paired with lit-rpg elements and time travel, where the protagonist is sent back to a significant time in his past after death.

Some of the popular variations are:

Some examples of such web novels are;

There are many varieties of this. They are all Eastern themed and inspired by Chinese and Korean web novels. They all involve some sort of mana, aura or qi. The reasons for the general name is because there are so many different categories from xianxia to qihuan to xuanhuan. the one true thing they all seem to share is the cultivation of an internal energy that makes the person stronger, longer living, etc. and some sort of personal quest that drives the protagonist or story forward be it immortality, revenge or good old world domination.

Examples of this include:

We are fascinated about the end of the world and the sheer popularity of these novels is proof of that. That notwithstanding, it deserves mention that apocalypse stories are not so much about the world ending or humanity going extinct but rather the triumph of humans in the face of their would-be-end. Also, nearly every single apocalypse story lately is a lit-rpg. That has become so prevalent that if I actually see a blue screen pop up in front of me the first thought that will come to mind is “The end is upon us!”

Notable examples of such novels are;

There you have it!

The 5 most popular tags for original web novels right now.

Use this information wisely 😉